Driving from Clemson, SC to Pigeon Forge, TN we knew it was going to be a fun and unique day.  The drive today would take us through 4 states, the Appalachian Mountains and one of the east coasts most famous national parks.

We started the day in the far northwest corner of South Carolina leaving Clemson and driving northwest in the most northeastern corner of Georgia.  This started off beautiful as it seemed that within minutes, we had reached the foothills of the Appalachians. We drove up Route 28 passing rafting companies with people lined up outside, getting instructions before heading out onto the Chattooga river.

We continued north and within 30 minutes crossed over into North Carolina.  We continued driving north on route 28 to 64 then pulled into the town of Franklin where we decided to walk around to stretch our legs for a bit.  Franklin as it turned out was a beautiful little town.  Situated in far western North Carolina, the Main Street was just a bit higher than the surrounding streets, so after parking Bubbles we hiked up a block then wandered around.  We wandered up and down the main street before heading to the west side of town to check out Lazy Hiker Brewing.

Stopping at breweries has been one of our favorite things about traveling.  More than just a good beer, these stops were great for picking up great local tips from the bartenders and patrons.  We weren’t sure how things were going to go because of Covid in these situations.  As it turned out things at this brewery in little Franklin, NC were just the same as they were back home in Tampa.  Mask on to enter, no sitting at the bar and there were limited seating spaces inside.  As we felt comfortable, we decided to have a flight and sit down.  We ended up loving Lazy Hiker.  The beers and the space were both great!

From Franklin it was time to head into the national park.  One of the more unique aspects about Great Smoky Mountains National Park is that it is free to enter.  As there are not many roads in the area the fastest way for us to get from Franklin, NC to Pigeon Forge, TN was directly through the park on route 441.

Entering the National Park for the first time

Almost immediately after entering the park cars slowed down to a stop.  We didn’t really know why.  We knew this park was free so why the slowdown?  It turned out that there was a heard of elk blocking the road.  We were super excited about this as we had no idea that there were elk on the east coast of the USA.

Eventually cars started moving and we were off.  Route 441 cuts directly through the park going up thousands of feet until you reach the center of the park before descending down on the Tennessee side.  Once we reached the exit from the park on the TN side the road turned into a 4-lane parkway going through the woods.  The road then came out of the woods and entered into Pigeon Forge.

To say we were shell shocked would be an understatement.  In all of our experiences out west, the towns next to National Parks were generally small; just big enough to support the needs of travelers to the park.  We didn’t do any research prior to booking our campground in Pigeon Forge so coming out of the woods was quite shocking.  There were huge hotels, dinner theatres, small amusement parks and restaurants everywhere we looked.  Where were we, we thought?  I guess we should have done a little prior research because we were staying at the hometown of Dolly Parton and her Dollywood Amusement Park.

We pulled into the Pigeon Forge KOA and it was packed.  While we probably shouldn’t have been surprised, but we were.  The last few nights we had stayed in half full campgrounds but as it was Friday afternoon the place was packed with people excited for the weekend.  It is what it is we thought.  We unknowingly booked a beautiful weekend at Dollywood.  Might as well make the best of it.

The next day after waking up we decided to drive down the Pigeon Forge strip and see what there was to see.  We had driven down the main drag the day before for about a mile so this morning we kept on going.  After driving down the 6-lane road for a few miles we came to a conclusion…Pigeon Forge was the most touristy town that we had ever been to.  Just like the day before there were chain restaurants, small go carts and putt-putt courses, themed dinner theatres, gift shops, fudge outlets and so much more.  We had been to a few other touristy towns in the past; Wisconsin Dells, WI, Ocean City, MD and Niagara Falls, Canada to name a few but Pigeon Forge, TN was bigger than all of them put together.  Needless to say we didn’t exactly feel safe here and didn’t leave the vehicle with the Covid pandemic going on.

Maybe Gatlinburg would be different we thought.  When people come to the National Park or Pigeon Forge, they either stay in or visit Gatlinburg as well.  From Pigeon Forge, Gatlinburg is only a 20-minute drive.  It’s much smaller and prettier but just like going to Pigeon Forge we were just as shocked to see the scene there.  In Gatlinburg there was a simple 2 lane road that cut through the town.  The main street was sandwiched between a river and a mountain and the buildings were in a Swiss style mountain village theme.  They were beautiful.  But just like in Pigeon Forge people were everywhere.  They were shoulder to shoulder on the sidewalk with only maybe 1 in 15 wearing a mask.  As much as we wanted to get out and explore on foot, we did not want to be caught in this mass of people and potentially get sick.  We slowly drove through town and thought someday we would come back to visit once the pandemic is over.

As disappointed as we were not to be able to walk around Gatlinburg; the town was not the reason that we were here.  It was time to go and start to explore the National Park.  1st stop was the visitor center, to grab a map and talk with a ranger to find out what we should see with a two-day itinerary.

As it is Covid times, we could not simply walk into the visitor’s center.  People were lined up outside, 6 feet apart and you could only enter the building once someone had exited.  After about a 15-minute wait we were able to go in and get what we needed.  We decided that today we would stick to the lower elevations of the park and drive the Cades Cove Loop.

The Cades Cove Loop is an 11-mile one-way loop that takes you around Cades Cove, an isolated valley deep within the park.  As it was a Saturday, at the height of tourist season, the road was bumper to bumper and cars were only moving 20-25mph.  That was ok by us though, we were not here to zoom through the road.  At its peak in the late 1800’s over 650 people lived in the valley.  When the National Park took control in the late 1930’s they dismantled the more modern structures but left the rugged log structures that were representative of 19th century pioneer life in the region.  On the loop there were overlooks to stop at and check out the views as well as 12 other stops to see log cabin homes, churches as well as other commercial buildings of the era.

After leaving the Cades Cove loop we decided to check out the nearby town of Townsend.  On the way just outside of the park boundary we came across the Cades Cove Jeep Outpost.  The Jeep Outpost was dedicated to Jeep Wranglers and only Jeep Wranglers.  As the owner of a 1998 Wrangler I was in Jeep heaven.  We had seen quite a lot of people driving their Jeeps that day which we thought was normal, as it was a beautiful day and we were in a National Park.  Now we knew it was also because of this amazing store.  Walking inside the walls were plastered with pictures people had taken with their Wrangler in the store’s parking lot.  There were hundreds upon hundreds of pictures.  Inside the store there was everything from Jeep tee-shirts and gifts to new bumpers, shocks and sound systems.  It was pretty awesome and made me want to jump in my old jeep and come here asap.  After driving over to Townsend and finding that there was not much to see we headed back to our campground for the night.

The next day we woke up excited to see some of the peaks of the National Park.  After eating breakfast, we headed out.  Our first stop of the day was going to be at Newfound Gap, almost directly in the center of the park.  Pigeon Forge sits at just over 1000 feet in elevation and Newfound Gap is at just over 5000 feet so Bubbles was going to use some muscle today with all the elevation gain.  Driving up to the gap we stopped at overlooks to take in the views.  As we got close to the gap the views were truly amazing.  We saw mountain tops with what looked like “smoke” in the distance.  Once we reached the gap, we were able to take in views from both sides of the road.

Newfound Gap is famous for two reason.  The first and most famous is that it is the place where Franklin Roosevelt dedicated the park on September 2, 1940.  To this day there is still the rock platform built for the occasion with a large plaque telling about the ceremony.  Newfound Gap is also directly on the border of North Carolina and Tennessee.  At 5048 feet this state border crossing was the highest that we had passed by on the east coast!

From Newfound Gap we drove 7 miles to Clingmans Dome, the highest point in Great Smoky Mountains National Park at 6,643 feet.  Once we reached the parking area, we walked a half mile path that lead to an observation tower.  From the observation tower the views were amazing.  As Clingmans Dome is the 3rd highest mountain on the east coast we could see for miles in all directions.  It was a pretty popular spot so with quite a few people around we didn’t want to stay forever.  We walked back down to the van hungry for lunch.

We had driven by some beautiful pull offs on the road to Clingmans Dome and we thought that we would pull over and take in the view while we ate.  We found a great one, pulled over, put our camping chairs in the grass and had a sandwich looking miles over the national park.  It was one of the best lunches we had enjoyed so far on the trip.

After lunch we slowly made our way back to Newfound Gap then back down the road towards Pigeon Forge.  We stopped at Publix for groceries and at a cool nitrogen ice cream bar called Dulce Nitrogen Ice Cream and Bubble Tea for a treat.  It was an awesome place!  We then made our way back to the campground to make dinner and relax the rest of the night.  The next day we would be starting a very special journey.

Next up…Part one of our attempt to drive the entire Blue Ridge Parkway! 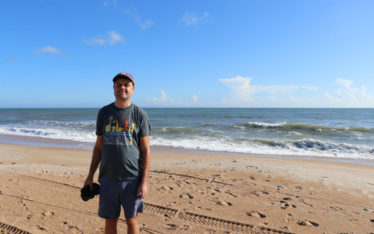