Just before the Nevada border the scenery took a drastic turn from arid farmland to dry desert.  We passed the Welcome to Nevada sign as we entered the outskirts of Reno.  As we drove towards the town, I had remembered the previous time I had been in Reno back in 2007.  My friend Matt and I had just used it as a stopping point.  We had booked a cheap room at one of the smaller casino’s and had spent the night cruising from casino to casino.  I can’t say it was the nicest city that I had ever been to but for two single guys we had a good time.  Needless to say I was looking forward to having another memory of the city, this time with my wife, Julie.

As we entered the downtown area we drove through block after block of smaller casinos.  This area looked very familiar to me.  We parked and started to walk around.  We found the famous “The Biggest Little City in the World Sign” and stepped into a few of the casinos.  Compared to some that we had been to in Las Vegas or even Biloxi, MS, these in Reno were definitely showing their age.  They were not ones that we wanted to stick around and explore.  We thought though as Reno is a fairly large town there had to be a nice section or two.

As we walked a bit further, we noticed most people going in one direction above all else, so we decided to follow.  What we found was Reno’s Riverwalk District.  Almost immediately our minds were blown.  We had gone from a downtown with big blocks of semi run down dirty casinos and had come across a sparkling clear river with a small island park and people swimming and tubing right in the river.  It was not a scene that we had thought that we would stumble upon in this city.  To say that it was a breath of fresh air would be an understatement.

There were families sitting in the park and along the big rocks next to the river.  Kids were putting their legs in as their dogs swam a bit. We walked over to the island sitting by one of the huge rocks for a bit as we put our feet in the cool waters of the river.  We looked back towards downtown almost in disbelief that this was the same city.

After we were done soaking our feet, we noticed a Riverwalk walkway next to the river, so we took a stroll.  As we walked, we saw groups of people tubing down the river.  We then entered a beautiful tree lined neighborhood with what seemed like houses from the 1920’s.  While the neighborhood wasn’t big it was a huge contrast to what we had seen over the past few hours.  Reno is surrounded on most sides by huge desert mountains.  We walked through the downtown area, which is mostly filled with dirty looking casinos.  Then to stumble upon this little neighborhood that looks like it was plucked right out of middle America.  It was pretty cool.

After we walked around the neighborhood for a bit we walked back to the Riverwalk and to the island park area.  Here we noticed a small Sierra Taphouse.  We got ourselves a few beers then went out to their patio where we sat and watched people walk by.  It was here we thought “You know, Reno’s really not that bad”.  It had a beautiful park and river running right through the center of the city.  Living for most of my life in two cities based around rivers (Rochester, NY & Tampa, FL); I would never even think to go for a swim in their rivers, but here in Reno I would not give it a second thought to jump right on in.  After we finished our beers we headed back to Bubbles and drove over to our campground for the night.

The next morning, we woke up and after a quick breakfast we were off again.  Today we would be visiting two of Reno’s small neighbor cities, Virginia City & Nevada’s capital city of Carson City.  Our first stop was Virginia City.  Virginia City is a historic western town located on the side of Mt. Davidson at an elevation of over 6000 feet, just southeast of Reno.  This town was the site of the 1st major silver deposit discovery in the United States.  The town’s heyday ran from 1859 until 1878.  With the discovery of silver in 1859 the town’s population exploded from just a few hundred to 25,000.  Not only did the “Comstock Lode – the name of the huge silver deposit” make Reno & Nevada a wealthy state but also helped to fund the north during the American Civil War.

The town today still clings to the side of Mt. Davidson with a population just under 900.  Driving a big vehicle up and into the town wasn’t the easiest.  We took route 341 which seemingly cut and curved straight up the huge mountain.  We turned through switchback after switchback before finally arriving in Virginia City.  The town to us resembled one of the western looking towns that we had seen in the Black Hills of South Dakota – the buildings were kept looking like they were from the late 1800’s.  Everything was made of wood including the wooden boardwalk sidewalks.  Most of the shops were tourist in nature, either selling trinkets to purchase and as this was an “old west Nevada town” there were quite a number of bars that looked like they were former brothels.

Julie and I walked up and down the boardwalk of the town peeking our heads into the tourist shops and bars.  One of the first places we stopped in was The Roasting House coffee house for a great coffee.  The coffee house was located in an old bar complete with the old bar counter.  In the back was their 100+ year old roasting machine.  Having the roasting machine inside the coffee shop made the building smell amazing.  We then hit the boardwalk and walked up the street.

It was getting to be around lunchtime and as we were getting hungry for something other than our normal van sandwich, we decided to check out the Virginia City Jerky Co.  Now I know what you are thinking “Jerky for lunch?” but the jerky co did not just have jerky but they were also a full BBQ restaurant!  Julie and I settled in for a lunch of ribs & a few of their sides.  We washed it all down with a Nevada Battle Born beer.  It was a pretty tasty lunch!

Before we left Virginia City, we learned one more pretty unique fact about the town.  The name Mark Twain was “born” in the town.  Samuel Clemens better known as Mark Twain was a reporter for the towns local paper, the Territorial Enterprise from 1862 until 1864.  He started to use the name in February 1863.  He left town abruptly in 1864 as he and a local newspaper editor had gotten into an argument about some of Clemens reporting and the editor had challenged him to a duel.  As he did not want to face his potential death he quickly and quietly left town.  Crazy times in the old west.

Our last stop for the day was Nevada’s capitol city of Carson City.  Before I get into our visit to the town, I want to clarify a question that I’m sure you have reading this of “Why isn’t Las Vegas the capitol of Nevada?”  The short answer is that at the time that the capitol city was chosen, Las Vegas did not exist.  Carson City was founded in 1858 and Las Vegas in 1905 – 47 years later.

While Carson City isn’t huge, it isn’t tiny either with a population of just over 55,000 people.  We found parking (next to a casino of course) and walked over to the Nevada capitol building; our 35th state/provincial capitol building!  This building was one of the smaller state capitol buildings that we had been to.  While there was security, we had to pass through we opted not to take a tour as the building was so small.  The building was built in 1871 and while it used to house all branches of state government, only currently houses the governor’s office.  Sadly for us he was not in the day we were there.

The neat part about this state house was that the 2nd floor was a museum.  We read about why Nevada is the Silver State and why the capitol was here in Carson City instead of up on the mountain in Virginia City (the territorial governor at the time was influenced by a local Carson City lawyer).  We read about state law, state symbols and about Carson City itself.  All in all it was a pretty neat little capitol building.

After leaving the building we walked for a bit up and down Carson City’s main street.  It looked like they had just finished a major reconstruction project of their main street as everything looked brand new.  We stopped in a few stores before hopping back into Bubbles and heading to our next stop.

Next up…We spend a few days on the Nevada side of Lake Tahoe! 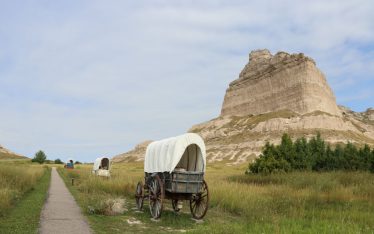 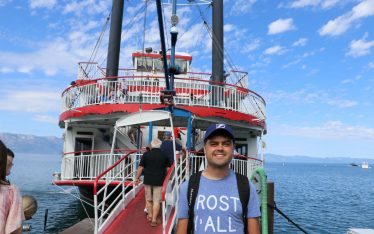 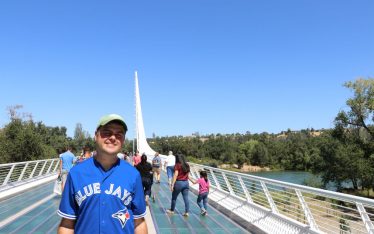